Spider-Man: Homecoming is the culmination of nearly a decade of interlocking storylines and successful films from Marvel (see Guardians of the Galaxy Vol. 2 review here). Each has led to a believable world in which superheroes exist. But so far none of the Marvel films really focused on what this world might be like for an average citizen.

What new jobs would be created, and which would become obsolete? How would education be affected by the presence, the science, and the battles of superheroes? Instead of movie stars and boy band crushes, which superheroes would high schoolers choose to F, marry, or kill? And would the average citizen feel more, or less, safe? Spider-Man finally answers these questions by giving us a friendly, neighborhood superhero who’s “looking out for the little guy.”

After the massive events of Captain America: Civil War, Peter Parker (Tom Holland) returns home to New York, now under the watchful eye of Happy Hogan (Jon Favreau) and mentorship of Tony Stark (Robert Downey, Jr.). He’s told to sit tight and focus on his sophomore year of high school when all he wants to do is find his next mission and prove himself worthy to join the Avengers full time. Parker believes taking down the Vulture (Michael Keaton) will earn him Stark’s respect, but his mistakes at school, with friends, and even his superhero life begin to add up and he soon begins to wonder if he’s even meant to be the Spider-Man.

It’s as much a traditional high school coming-of-age tale as it is a superhero flick, which is what makes it relatable. The story is evenly balanced between the actions of Peter Parker and Spider-Man, but through it all Tom Holland plays an exceptional character. His excitement at even the smallest new detail of his life is so genuine that I couldn’t stop smiling. I was geeking out watching him geek out. And just like a real teenager, he wants to be cool, has his mind on girls half the time, and is incredibly stubborn about who he wants to be while still harboring a deep anxiety that he’ll never achieve it.

His energy in the role is best matched by Jacob Batalon, who plays best friend Ned. When he discovers his best friend is Spider-Man, he has to know everything. He wants answers to the most ridiculous questions, he wants to try on the suit, and most importantly, he wants to know if he can be “the guy in the chair.” He’s the logistical smarts behind Parker’s technical skills, and his excitement at having Spider-Man for a best friend is only outweighed by his desire to fit in at school. I thoroughly enjoyed his performance and look forward to seeing more of him. Especially since he delivers probably the best excuse I’ve ever heard for being somewhere he’s not supposed to be.

As for the villain, Micheal Keaton is a worthwhile adversary in the role of Adrian/Vulture. Adrian didn’t begin as a bad guy, but he was never afraid to do some questionable things if pushed. Keaton recognizes this and does an excellent job of never losing that character core even as he becomes the Vulture. Keaton isn’t my favorite villainous actor of all time, but I can appreciate his handling of the character’s complexity.

I’d love to speak on the overall visual aspect and CGI of the film, but as I was forced to see Spider-Man from the front row with my neck craned back, I didn’t have the best perspective (see what I did there?). Keep in mind: show up to early screenings way before you think you need to.

And even with the poor viewing experience, I know that I’d still recommend this film. The fact that I enjoyed it as much as I did, even when seeing it in less than ideal conditions, proves that a movie doesn’t need to be about spectacle. A good story with excellent actors and believable worldbuilding is all that you need. Marvel has certainly perfected that.

P.S. Stay through all the credits. No spoilers, but you’ll probably enjoy it.

The first Guardians of the Galaxy ended with Peter Quill, aka Starlord (Chris Pratt), asking his cohorts, “What should we do next? Something good? Something bad? A bit of both?” They settle on the latter, and that’s exactly what Guardians of the Galaxy, Vol. 2 delivers: a bit of both good and bad. James Gunn returns to write and direct the second installment of the franchise and though he doesn’t hit every mark, he and his team hit enough of them to make the film a success.

When we rejoin Quill and Co., they’ve channeled their galaxy-saving experience into becoming guns for hire. Their skills on put to the test against a tentacled, sharp-toothed monster while the opening credits roll and “Mr. Blue Sky” by Electric Light Orchestra plays in the background. They receive the fugitive Nebula (Karen Gillan) as payment from their employer, a race of conceited, golden humanoids called the Sovereign. The Guardians leave with the crazy daughter of Thanos in tow, but not before Rocket (voiced by Bradley Cooper) steals from the golden gits. They only escape the Sovereign’s wrath with help from a mysterious man who reveals himself to be Ego (Kurt Russell), Quill’s long-lost father. Of course, no one truly trusts this man, but as Gamora (Zoe Saldana) so aptly puts it, “If he turns out to be evil we’ll just kill him.” So Quill, Gamora, and Drax (Dave Bautista) go with Ego and his companion Mantis (Pom Klementieff) to learn more about Quill’s past. Rocket, Baby Groot (voiced by Vin Diesel), stay behind, only to get captured by Quill’s old Ravager crew and wrapped up in a mutiny against Yondu that’s been brewing ever since he agreed to first transport cargo for Ego.

The story all boils down to family and how our relationships shape who we are, so much more than genetics ever could. The plot wants Quill and Ego to be the central relationship, but it’s actually the weakest of GOTG Vol. 2. At one point the two men play catch, and though I realize there’s meant to be a level of cheesiness, the scene steps into the realm of plain awkward. Pratt tries to infuse the father-son moments with his usual charisma, but because the camera is forced to bounce between the split groups of characters, he never has time to really inhabit the scene. The same could be said of Russell, whose lackluster Ego seems to be more a fault of the writing than of the actor. He’s saddled with all the exposition, his lines accompanied by porcelain shapeshifting statues whose sole purpose is to give the audience something to look at while he talks.

Yes, the plot is driven by the bond between Quill and Ego, but it’s the secondary characters who shine in this sequel, and the energy they put into their roles helps elevate the other performances when they falter. 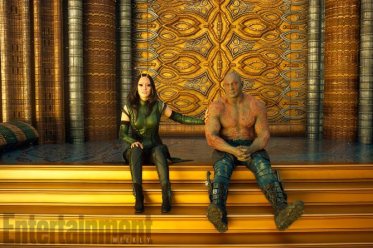 Bautista and Klementieff, especially, embrace their characters’ social miscues in order to deliver standout performances and some of the best interactions of the entire film. Michael Rooker gets plenty of material to expand his turn as Yondu Undonta, the Ravager that raised Quill, and he doesn’t waste it, running the gamut of emotion from smug to remorseful with ease. He also finds a kindred soul in Rocket, revealing more about the both of them and the poor decisions they’ve made. Nebula, who was my least favorite character in the original GOTG, is finally given space to properly channel her emotional intensity and psychotic rage and it works to much better effect. But if any character deserves a commendation, it’s Baby Groot. I don’t care if it was a marketing ploy or not, but he stole the show. Every. Single. Time. I’m sure some adults will think his presence overdone, but he’s “too adorable to kill.” I found Groot to be just pure, innocent fun.

Which is ultimately what makes GOTG Vol 2. a success. Nothing is taken too seriously and it’s all done in good fun. The result is a creative space ideal for instances of brilliance. Nothing quite on the level of Quill’s dance-off from the first film, but close. Rocket’s contraptions are a joy to watch in action, as is a moment of hand-to-hand combat where he proves he’s more than his toys. Everything about Yondu and Rocket’s escape from the mutinous Ravagers is fantastic, as is the song choice of “Come a Little Bit Closer” by Jay & the Americans. But above all, what continues to stick with me is the moment Quill is handed a Zune.

I remember the first mp3 player I ever bought was a Zune. The product turned out to be an unsuccessful attempt by Microsoft to compete against the Apple iPod, but I loved it all the same. So seeing Quill’s eyes light up at the publically ridiculed product, I about lost my mind. It was perfect. Sure, it may have been a tongue-in-cheek decision by writer/director James Gunn; he’s always been a bit unorthodox with his decisions for the GOTG. But it represents everything I love about the franchise: wholesome, unadulterated fun, despite its flaws.