I saw the first Pirates of the Caribbean on an analog television not meant for widescreen DVD playback. The aspect ratio was so terrible that I had to watch the action between two six-inch panels of black, but I didn’t want to miss a thing so I kept scooting closer. Pirates of the Caribbean: Dead Men Tell No Tales is the first of the series that I’ve seen on the big screen, yet it’s the only one that made me feel like it’d be okay if I looked away. 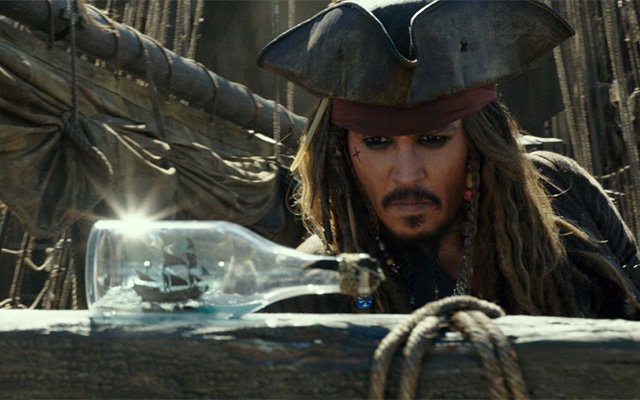 This time around everyone’s searching for the Trident of Poseidon, a magical artifact that holds the power of the sea, but their reasons never engaged me like any of the preceding films. Henry Turner (Brenton Thwiates) wants it to free his father from the curse of the Flying Dutchman, newcomer Carina Smyth (Kaya Scodelario) wants to connect with a father she never knew by finding the Trident detailed in the journal he left her, and Jack Sparrow (Johnny Depp) needs it to avoid the revenge of Captain Salazar (Javier Bardem) and his ghost crew. The familial bonds drawing Henry and Karina to the Trident are sufficient for introducing it as a potential treasure, but Jack’s need of the Trident—which is supposed to be urgent as it’s the only way to save his life—comes across, to quote Dead Man’s Chest, as less of a “resolute and unyielding need” and more a “trifling need […] a passing fancy.”

Jack Sparrow never once says, “I need the Trident of Poseidon.” In Dead Man’s Chest, he was very clearly terrified of the debt he owed Davy Jones and his pet beastie. He did everything in his power to prevent collection of that debt. In Dead Men Tell No Tales he meanders around on screen drinking rum for the first hour, barely aware of the danger Captain Salazar poses. Not until he and Captain Salazar finally meet does the plot pick up again as Jack realizes the threat of vengeful Spanish ghosts (and ghost sharks) is real. Though the threat apparently still isn’t real enough for Jack to start suggesting the group goes after the Trident with all haste.

Perhaps that’s a result of Captain Salazar as a villain. His thirst for revenge helps to drive the plot and certainly makes him dangerous, but it seriously stunts him as a memorable Pirates villain. Beyond the somewhat ho-hum ghostly CGI mapped around his face, all he has is his rage and a single-minded determination to find Sparrow by whatever means necessary. Bardem delivers a few excellent scenes, but it’s mainly him making due with a one-dimensional character.

Almost all the actors have to “make do” this time around as they portray characters from across the franchise. There are some classic Pirates moments that prove no one is just going through the motions—a failed bank robbery, an escape from the gallows, and the initial meeting between Sparrow and Salazar all provide the physical comedy, action, and clever banter we’ve come to love and expect—but the rest of the film relies on a script at times contrived (e.g. Paul McCartney’s cameo and an absolutely pointless witch) and at others completely ignorant of Pirates canon (i.e. the origin of Jack’s compass). The actors are left with the task of making us believe it all. Something not even Johnny Depp can do.

It doesn’t matter how big the spectacle or how many off-the-wall antics the filmmakers convince Depp to act out, the Pirates of the Caribbean franchise won’t survive without an engaging story. The original film wasn’t a hit because of its CGI-heavy action sequences. It wasn’t a hit because of drawn out misinterpretations of what a horologist does for a living. And it certainly wasn’t because the audience enjoyed watching Jack Sparrow get drunk and stay drunk on screen. The original film was a story about freedom, adventure, and a man who valued those things above all else. Depp’s Academy Award-nominated performance was inspired by that story. For the sake of that performance and the legacy of the franchise, perhaps it’s good Dead Men Tell No Tales is being touted as the final adventure.